CALGARY, Nov. 9, 2017  /CNW/ – Cequence Energy Ltd. (“Cequence” or the “Company”) (TSX: CQE) is pleased to announce its operating and financial results for the three and nine month periods ended September 30, 2017. The Company’s Consolidated Financial Statements and Management’s Discussion and Analysis are available at cequence-energy.com and on SEDAR at www.sedar.com. 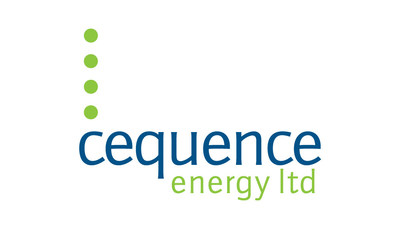 Operational and financial highlights of the Company from the third quarter include:

Funds flow from operations of $3.6 million for the third quarter and $17.7 million year to date increased the previous year and reflects both improved crude oil and natural gas prices, improved liquids yield and the Company’s lower cost structure.

Despite a 28 percent decline in benchmark natural gas prices compared to the third quarter of 2016, the Company’s average realized price increased by 7 percent.  Realized hedging gains in the quarter totalled $3.65/boe.   Comprehensive loss for the quarter ended September 30, 2017 was $3.1 million compared to a loss of $0.9 million in 2016. Year to date, the Company recorded an loss of $92.7 million driven by a $96.2 million impairment charge in the second quarter from the prolonged decline in its third party reserve evaluators’ future oil and natural gas price forecast over the life of the Company’s reserves.

Capital expenditures, net of dispositions, were $2.7 million in the third quarter and relate primarily to a Dunvegan recompletion and oil facility work at Simonette.

The Company’s senior credit facility of $20 million is currently undrawn with the next scheduled bank review to be completed by the end of November 2017.

Average production in the third quarter of 2017 of 8,266 boe/d was down 4 percent from the third quarter of 2016. Cequence either shut in or curtailed between 1,000 and 1,500 boe/d through periods of August & September associated with low AECO gas prices and pipeline restrictions.  Low AECO prices & pipeline restrictions have continued into October with Cequence continuing to shut-in volumes through the month.  Beginning November 1, 2017, Cequence has begun bringing wells back online with higher prices and improving pipeline access.

Operating costs in the quarter increased to $9.21/boe compared to $7.85/boe 2016.   The Company incurred $0.8 million of incremental costs associated with accelerating its water disposal efforts in the Simonette field.  The Company is utilizing infield trucking and gas gathering pipelines to transfer water to its 100% owned disposal well.  This water disposal effort will be finalized in the fourth quarter with an additional cost of $0.7 million over that same period. The accelerated water disposal effort will reduce long term equipment rentals and ongoing associated transfer costs by $2.5 million per year.

Oil and condensate production in the quarter increased by 26% or 256 bbl/d over the same period in 2016 with oil production up 122% to 388 bbl/d. The two Dunvegan oil wells (50% WI) brought on stream in January of 2017 continue their strong performance, with the 9-11-62-26W5 well having produced 95,000 bbls to the end of October.  The tie-in of the Cequence operated 5-7-62-25 oil facility, which occurred in July, has provided more reliable well operating times and efficiencies.

In the third quarter, Cequence completed the 100% working interest Dunvegan zone in an inactive vertical well located at 03/4-8-62-26W5.  The well was brought on production September 4th and has produced approximately 45 bbl/d of 39 API oil since that time.  This test has validated 100% Cequence interest lands and supports the 24 net locations previously identified on the play.  An extension of the Dunvegan oil play West of the 4-8 vertical well has been identified on seismic.  This extension may further increase the Cequence net inventory by 10 wells.

A 3 gross (2 net) Dunvegan oil program is set to commence in the fourth quarter 2017.

The Company has revised its full year guidance to include the results of the first nine months of the year performance and the current outlook for commodity prices. The revised guidance reflects the impact of the low gas prices and pipeline related volume restrictions experienced in the third and fourth quarter as well as the associated capital program since that time.  In light of the current commodity pricing environment, the Company expects to focus its winter drilling program on its Dunvegan oil asset.

Cequence is a publicly traded Canadian energy company involved in the acquisition, exploitation, exploration, development and production of natural gas and crude oil in western Canada. Further information about Cequence may be found in its continuous disclosure documents filed with Canadian securities regulators at www.sedar.com.

“BOEs” or “barrels of oil equivalent”, a term commonly used in the oil & gas industry, may be misleading, particularly if used in isolation. A BOE conversion ratio of six thousand cubic feet of gas: one barrel of oil is based on an energy equivalency conversion method primarily applicable at the burner tip and does not represent a value equivalency at the wellhead.

Within the MD&A references are made to terms commonly used in the oil and gas industry, including operating netback, cash netback, net debt, funds flow from (used in) operations and total revenue.

Operating netback is not defined by IFRS in Canada and is referred to as a non-GAAP measure. Operating netback equals per boe revenue less royalties, operating costs and transportation costs. Management utilizes this measure to analyze operating performance of its assets and operating areas, compare results to peers and to evaluate drilling prospects.

Cash netback is not defined by IFRS in Canada and is referred to as a non-GAAP measure. Cash netback equals operating netback less per boe general and administrative expenses and interest expense. Management utilizes this measure to analyze the Company’s per boe profitability for future capital investment or repayment of debt after considering cash costs not specifically attributable to its assets or operating areas.

Net debt is a non-GAAP measure that is calculated as working capital (deficiency) less the principal value of senior notes.  For this calculation, Cequence uses the principal value of the senior notes rather than the carrying value on the statement of financial position as it reflects the amount that will be repaid upon maturity. Cequence uses net debt as it provides an estimate of the Company’s assets and obligations expected to be settled in cash.

Total revenue equals production revenue gross of royalties and including realized gain (loss) on commodity contracts.  Management utilizes this measure to analyze revenue and commodity pricing and its impact on operating performance.

Non-GAAP financial measures do not have a standardized meaning prescribed by IFRS and are therefore unlikely to be comparable to similar measures presented by other issuers.