CALGARY, May 16, 2019 /CNW/ – Highwood Oil Company Ltd., (“HOCL“, “Highwood” or the “Company“) (TSXV: HOCL) is pleased to announce that it has entered into an agreement with a publicly traded oil and gas exploration and production company (the “Vendor“) to purchase high quality oil assets in the Peace River Oil region of Northern Alberta for a total transaction value of $93.8 million, comprised of cash considerations of $88.8 million and equity consideration of $5.0 million prior to customary closing adjustments (the “Acquisition“). The Acquisition includes a 55% operated working interest (“WI“) in the Peace River Oil Partnership (the “PROP“) (8,000 boe/d gross production, 4,400 boe/d net production to HOCL, 89% oil and liquids). The PROP asset (the “Assets“) is a world-class resource with a large drilling inventory in the conventional Bluesky and emerging Clearwater oil plays where significant low risk development opportunities exist. The Assets also include access to a large 2D / 3D seismic database license, and extensive egress and infrastructure in place to facilitate self-sustaining operations. 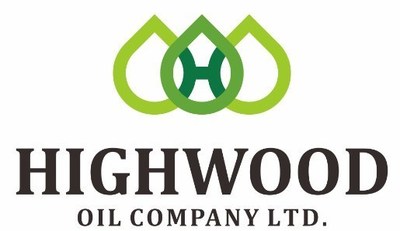 The Acquisition is a continuation of the Company’s strategy to position itself as an area consolidator within oil-weighted resource plays where its management team has the experience and technical expertise to drive significant operating synergies. The Acquisition adds size and scale that will transition HOCL to become a strong intermediate oil weighted growth company. The Acquisition, which is being purchased at an attractive 2.9x multiple of operating funds flow and 3.8x multiple of free operating funds flow, is >160% accretive to HOCL’s estimated funds flow per share, while adding lower decline production with high netbacks and compelling new-drill capital efficiencies.

Based on annualized second half 2019 internal estimates, pro forma the Acquisition, HOCL is set to deliver 6,100 boe/d (93% oil and liquids) with operating funds flow of $55 million. Highwood’s balance sheet remains strong with a projected debt to funds flow ratio of approximately 2.3x assuming the Acquisition is financed with debt.

The PROP was formed in 2010 when the non-operating partner purchased a 45% WI in the Assets to develop what was mutually heralded as a “world-class oil resource” in the Peace River area. The Peace River area has a large drilling inventory, considerable secondary recovery potential, a moderate base decline, strong operating netbacks and capital efficiencies; collectively, providing a stable base for HOCL to grow from for decades to come. Operationally, over the past year, the PROP partners and industry have drilled 19 multi-lateral Bluesky horizontal wells (with 8-16 legs); the IP30 rates from those wells range from 180 bbl/d to >800 bbl/d.

PROP is anticipated to provide a multi-year source of free operating funds flow to fund sustainable growth and carries meaningful near and long-term development opportunities:

In summary, based on internal estimates of H2 2019E projections, the key benefits to Highwood’s shareholders pro forma the Acquisition are as follows:

SUMMARY OF THE TRANSACTION

The Acquisition has the following key characteristics:

Acquisition metrics are as follows:

The following is HOCL’s change in the company’s annualized internal estimates for the second half of 2019, after giving effect to the Acquisition:

Barrels of Oil Equivalent â This news release discloses certain production information on a barrels of oil equivalent (“boe”) basis with natural gas converted to barrels of oil equivalent using a conversion factor of six thousand cubic feet of gas (Mcf) to one barrel (bbl) of oil (6 Mcf:1 bbl). Condensate and other NGLs are converted to boe at a ratio of 1 bbl:1 bbl. Boe may be misleading, particularly if used in isolation. A boe conversion ratio of 6 Mcf:1 bbl is based roughly on an energy equivalency conversion method primarily applicable at the burner tip and does not represent a value equivalency at sales point. Although the 6:1 conversion ratio is an industry-accepted norm, it is not reflective of price or market value differentials between product types. Based on current commodity prices, the value ratio between crude oil, NGLs and natural gas is significantly different from the 6:1 energy equivalency ratio. Accordingly, using a conversion ratio of 6 Mcf:1 bbl may be misleading as an indication of value.

The flowing definitions do not have a standardized meaning prescribed by Canadian generally accepted accounting principles (“GAAP”) and therefore may not be comparable with the calculation of similar measures by other companies.

“Funds flow netback” is calculated as revenues net of royalties, less transportation and processing charges, operating expenses, general and administrative expenses and interest expenses and then divided by BOE of Mcf sold.

“Operating netback” is calculated as revenues net of royalties, less transportation and processing charges and operating expenses and then divided by BOE or Mcf sold.

This news release contains estimates of the net present value of the future net revenue from the reserves to be acquired pursuant to the Acquisition. The estimated values of future net revenue disclosed in this press release do not represent fair market value. There is no assurance that the forecast prices and cost assumptions used in the reserve evaluations will be attained and variances could be material.

Statements relating to reserves are deemed to be forward-looking statements as they involve the implied assessment, based on certain estimates and assumptions, that the reserves described exist in the quantities predicted or estimated, and can be profitably produced in the future. Such forward-looking statements or information are based on a number of assumptions all or any of which may prove to be incorrect.  In addition to any other assumptions identified in this document, assumptions have been made regarding, among other things: