TORONTO, April 2, 2020 /CNW/ – Uranium Participation Corporation (“UPC” or the “Corporation”) today filed its Financial Statements and Management’s Discussion & Analysis (“MD&A”) for the year ended February 29, 2020.  Both documents can be found on the Company’s website (www.uraniumparticipation.com) or on SEDAR (www.sedar.com). The highlights provided below are derived from these documents and should be read in conjunction with them.  All amounts are in Canadian dollars, unless otherwise noted. View PDF Version.

The Corporation had an effective tax rate of nil for the years ended February 29, 2020 and February 28, 2019, primarily due to the Corporation’s available tax shelter giving rise to a net deductible temporary difference â for which the Corporation does not recognize deferred tax assets.

The Corporation had an effective tax rate of nil for the years ended February 29, 2020 and February 28, 2019, primarily due to the Corporation’s available tax shelter giving rise to a net deductible temporary difference â for which the Corporation does not recognize deferred tax assets.

Much of fiscal 2020 was defined and influenced by policy matters in the United States (‘US’), which have effectively created an overhang of uncertainty throughout the uranium market. In July 2019, the US Presidential Administration completed an investigation into a trade petition, launched under Section 232 of the Trade Expansion Act of 1962 (‘Section 232’), and no trade actions were implemented. The US President indicated that the Administration’s investigation did not agree with findings of the US Department of Commerce (‘DOC’) that uranium imports threaten to impair US national security. This announcement was expected to provide clarity to the uranium market; however, the Administration followed the decision with an order to review the nuclear fuel supply chain in the US. Accordingly, a Nuclear Fuel Working Group (‘NFWG’) was commissioned to examine the current state of domestic nuclear fuel production to reinvigorate the entire nuclear fuel supply chain, consistent with US national security and non-proliferation goals, and to make recommendations to further enable US domestic nuclear fuel production, if needed. A report from the NFWG was submitted to the White House in late 2019. To date, no official recommendations have been made public; however, the President’s recent Budget Request for Fiscal Year 2021 included $150 million in Department of Energy budget funding to establish a uranium reserve.  The Budget Request also set out a schedule for a similar amount to be approved in the budget in each of the next ten years.

Another source of uranium market uncertainty stems from policies relating to Russian deliveries of nuclear fuel into the US. Since breaking from the Joint Comprehensive Plan of Action with Iran, commonly known as the Iran Nuclear Deal, the US Administration has put in place sanctions against Iran. The US has also issued waivers to certain of Iran’s trading partners, allowing entities from particular nations, including Russia, to continue working with Iran on civilian nuclear programs. On December 15, 2019, one of those waivers, related to Iran’s Fordow Fuel Enrichment Plant, was lifted, which raised concern among market participants regarding the possibility of other waivers being revoked. The waiver causing uranium market participants most concern relates to the Bushehr nuclear power plant, which Russia is involved in building. If this waiver is revoked, there is concern that Russia could face sanctions in the US, which would halt deliveries of Russian nuclear fuel to US utilities and represent a significant supply-side development.

Also relevant to Russian nuclear fuel supply into the US is the Agreement Suspending the Antidumping Investigation on Uranium from the Russian Federation (also known as the Russian Suspension Agreement, or the ‘RSA’), which established an annual quota limiting the delivery of nuclear fuel into the US from Russia. This agreement is set to expire at the end of 2020 and is currently under review. Before the agreement expires, a decision needs to be made by the US DOC as to whether there will be an extension and, if so, whether an extension will be under existing or revised terms. If the RSA expires, Russian-origin uranium products and services could be sold into the US without any restrictions â adding further uncertainty to the uranium market.

These policy matters contributed to a soft uranium price throughout fiscal 2020, with the spot uranium price trading within a narrow band and weakening over the period. The spot price started the year at US$28.00 per pound U3O8 and ending it down almost 12% at US$24.70 per pound U3O8. During calendar 2019, spot uranium volumes remained reasonably strong at 65 million pounds of U3O8, though much of this demand was related to buying and selling between intermediary parties rather than end-user buying, which limited any positive impact on the spot price.

Despite the continued price weakness, there are several indications that uranium supply and demand fundamentals are improving underneath the cloud of uncertainty that dominated the market in fiscal 2020. This was underscored in the bi-annual Nuclear Fuel Report released by the World Nuclear Association (‘WNA’) at its annual symposium in September 2019. The report evaluates nuclear fuel demand and supply scenarios for the period from 2019 to 2040, using reference, low and high cases. For the first time in several years, the WNA’s outlook for global uranium demand increased for all three scenarios, which is positive for the outlook on demand and reflects industry consensus that the demand picture has improved significantly in recent years.

Very recently, events related to the COVID-19 pandemic have begun to impact the nuclear fuel market. On March 23, 2020 Cameco Corp. announced the temporary suspension of production at its Cigar Lake mine in northern Saskatchewan, which is the world’s largest operating uranium mine. In conjunction with this announcement, Orano Canada Inc. suspended operations at the McClean Lake mill, which is currently processing the ore from Cigar Lake under a toll milling agreement. Annual uranium production from these sites is approximately 18 million pounds U3O8. The length of the suspension of operations at the Cigar Lake mine and McClean Lake mill is unknown, but is expected to last at least four weeks.  While the impact of this suspension is unknown, this is a significant unexpected supply-side event for the nuclear fuel industry. As at Monday March 30, 2020, the spot price of U3O8 had risen to US$27.40 per pound U3O8. As the COVID-19 situation develops, there is the potential for other uranium mining and processing facilities to be impacted and for the duration of the Cigar Lake suspension to be extended.  In contrast, on the demand-side of the equation, nuclear power plants around the world continue to operate during the COVID-19 pandemic, providing reliable base-load energy to critical community infrastructure.

Also impacting the current outlook for nuclear energy are many positive news stories on the demand side, including increasing public recognition of the critical role nuclear energy has to play in combatting climate change.

Though much of the nuclear news out of Asia was positive, news emerged from Japan early in calendar 2019 that the requirements set out by the country’s Nuclear Regulation Authority (‘NRA’) for utilities to complete anti-terrorism protection work on each reactor’s emergency facilities were unlikely to be met on schedule. All three utilities currently operating nuclear power plantsin Japan have said they require between one and two and a half additional years to complete the required work. The NRA has indicated, however, that it will not extend the deadline. Due to this, it was recently announced that reactors 3 and 4 at the Takahama nuclear power plant will stop operating by the summer of 2020, with work aimed at meeting the NRA commitment about one year behind schedule

Overall, uranium demand has grown in recent years, having now exceeded the annual levels that existed prior to Japan shutting off all of its nuclear units following the 2011 Fukushima Daichii nuclear incident.

The supply side of the uranium market has also been progressing in the right direction â resulting in a growing gap between annual utility requirements and primary production, which continues to be filled by drawing down on inventories and other secondary sources of supply. Some of these positive supply indicators include:

The Manager and Board of Directors are closely monitoring the impact of the COVID-19 pandemic on the Corporation’s business. At this time, it is not possible to reliably estimate the financial impact on the Corporation, in terms of duration or severity, of the COVID-19 pandemic. At present, the uranium spot price has not been significantly impacted by the pandemic, nor have any of the Corporation’s storage facilities experienced any disruption of service that could impact the value of the uranium holdings; however,  it is possible that circumstances could change, resulting in price movement â both up and down â and/or operational disruption at industry storage facilities.  A future drop in the spot price, or an extended shutdown of any of these storage facilities, could have a materially adverse impact on the Company’s financial position, liquidity and financial results for future periods.

Certain information contained in this press release constitutes forward looking statements or forward looking information.  These statements can be identified by the use of forward looking terminology such as  “may”, “will”, “expect”, “intend”, “estimate”, “anticipate”, “plan”, “should”, “believe” or “continue” or the negative thereof or variations thereon or similar terminology. In particular, this press release contains forward-looking information pertaining to the value of the Corporation’s investments and expectations regarding uranium spot prices and uranium market factors, including expectations regarding uranium production levels, reactor restarts, levels of uncommitted utility reactor requirements, anticipated market supply and demand, the development of new nuclear power projects, the potential impact of international trade actions, and other statements regarding the outlook for the uranium industry and market. 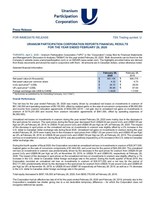