ROUYN-NORANDA, QC, March 29, 2022 /CNW Telbec/ – X-Terra Resources Inc. (TSXV: XTT) (FRANKFURT: XTR) (“X-Terra“) is pleased to provide an update on the Grog project, with respect the geochemical sampling program carried out in Q4 of 2021. The Grog project is part of a regional position held by XâTerra along the McKenzie Fault located in Restigouche County, New-Brunswick, where gold-arsenic and antimony geochemical anomalies have continuously indicated the presence of an extensive mineralized system associated with an understudied thrust belt.

In Q4 of 2021, X-Terra covered the Grog area with approximately 8.9 line kilometres of “B horizon” sampling, representing a total of 264 samples. The survey was designed to evaluate the east-west and north-east suspected structural controls with an average line spacing of 250 to 300 metres. The survey grid is centered on the existing Grog and Bellevue North drill showings, and it was extended up to 1 kilometre westward and southward to cover additional potential of the system inside the pre-identified magnetic signature and lithological environment. These new geochemical results were combined with X-Terra’s 2020 sampling lines (139 samples over 2.8 line kilometres) which were collected using the same methodology. The combined surveys now cover an area of about three square kilometres (300 hectares).

Six remarkable goldâantimonyâarsenic targets were identified in the Grog area, extending the potential gold trend by 1.5 kilometres along the north-east strike, and 2.5 kilometres along the east-west axis, following the Grog sedimentary sequence. Gold anomalies in this environment are defined by values ranging 10 to 67 ppb, spatially correlated with antimony anomalies of 10 to 75 ppm and arsenic anomalies of 50 to 440 ppm. Targets are based on the line-to-line correlation of values following structural trends identified by their respective magnetic contrasts. The map below highlights the six new important targets. 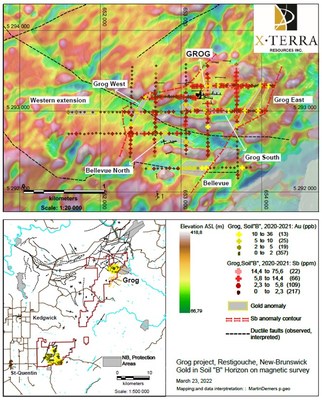 “Grog South”: This target is located 100 metres south of the Grog showing and is only partially known from the offset drilling done in 2020 where low grade intervals hosted in altered dykes follow an east-west trend. The new gold-arsenic anomaly can be followed over approximately 600 metres using three of the new north-south geochemical sampling lines.

“Grog East” Is an undrilled target located approximately 500 metres east of the Grog showing. The target position corresponds to the actual eastward limit of the goldâantimonyâarsenic anomaly covered by sampling. Gold in soil values were intercepted in three lines highlighting a north-east anomalous trend which is also superimposed on a magnetic contrast.

“Grog West” Is also an undrilled target located 500 metres westward from the Grog showing. The gold, antimony and arsenic anomaly is constrained by three sampling lines following an extension of about 200 metres. It also corresponds to a clear north-east demagnetization pattern.

“Western extension” New target identified one kilometre west of the Grog showing along one line situated on a never explored area. The target follows the same east-west magnetic signature related to the Grog sequence.

“Bellevue North” This target, while partly known but was not fully understood by the 2019 offset drilling which resulted in scattered values from 0.1 to 1 g/t Au. The new interpretation has indicated a clear east-west orientation of the gold structure identified by strong fracturing with disseminated sulfides. The new geochemical signature associated strong gold results with antimony covers 200 to 300 metres of strike length correlated with a magnetic low signature.

“Bellevue”: This undrilled new gold target is located approximately 200 metres north-east of the historical Bellevue South drilling completed in 2019. In addition, it corelates to a strong continuous gold in soil anomaly and lies in an east west low to moderate demagnetization pattern.

The soil survey approach has once again proved to be a very useful exploration tool for the Grog target in combination with IP and magnetic geophysical surveys. Without the aid of the geochemical survey, it was challenging to highlight a clear gold signature related to the sub-outcropping and drill tested Grog showing.

The best signatures obtained have been identified in the surrounding environment where little or no work has been completed. More importantly, progressive sampling over the Grog sedimentary sequence has highlighted new gold targets on an area that now reaches three square kilometres.

Michael Ferreira, President and Chief Executive Officer of X-Terra stated, “These new targets, continue to prove to us that we are situated within a major hydrothermal system that continues to grow. At Grog, the learning curve to understand where we lie in the epithermal system has been long and challenging. But, considering that there is no other example of this type of mineralization in the area and the particularly complex Appalachian geological framework, a step back and persistence had to be employed. The objective going forward is to refine each of the targets so that we can drill them with a high hit and success ratio”

The geochemical soil sampling program was completed by Terrane Geosciences inc. supervised by Stefan Kruse, Ph.D., P.Geo. Soil samples were processed at the Actlabs preparation facility of Fredericton, NB and at the Ancaster laboratory, Ontario. Samples were sieved at -177 µm considering the coarse nature of material collected. Prepared samples were submitted to Instrumental Neutron Activation Analysis (INAA). The detection limit for gold is 2 ppb.

Martin Demers, P. Geo registered in the Provinces of QuÃ©bec and New-Brunswick, a consultant to X-Terra, a qualified person under National Instrument 43â101 Standards of Disclosure for Mineral Projects (“NI 43-101“), has reviewed the technical contents of this news release and has approved the disclosure of the technical information contained herein.

This news release contains statements that may constitute “forward-looking information” within the meaning of applicable Canadian securities legislation. Forward-looking information may include, among others, statements regarding the future plans, costs, objectives or performance of X-Terra, or the assumptions underlying any of the foregoing. In this news release, words such as “may”, “would”, “could”, “will”, “likely”, “believe”, “expect”, “anticipate”, “intend”, “plan”, “estimate” and similar words and the negative form thereof are used to identify forward-looking statements. Forward-looking statements should not be read as guarantees of future performance or results, and will not necessarily be accurate indications of whether, or the times at or by which, such future performance will be achieved. No assurance can be given that any events anticipated by the forward-looking information will transpire or occur, including the exploration programs and development (including any drilling programs and drilling results) of the Grog project, or if it does so, what benefits X-Terra will derive from the Grog project. Forward-looking information is based on information available at the time and/or management’s good-faith belief with respect to future events and are subject to known or unknown risks, uncertainties, assumptions and other unpredictable factors, many of which are beyond X-Terra’s control. These risks, uncertainties and assumptions include, but are not limited to, those described under “Financial Instruments” and “Risk and Uncertainties in X-Terra’s Annual Report for the fiscal year ended December 31, 2020, a copy of which is available on SEDAR at www.sedar.com, and could cause actual events or results to differ materially from those projected in any forward-looking statements. X-Terra does not intend, nor does X-Terra undertake any obligation, to update or revise any forward-looking information contained in this news release to reflect subsequent information, events or circumstances or otherwise, except if required by applicable laws.

X-Terra is a resource company focused on acquiring and exploring precious metals properties in Canada.